For some reason, maybe it’s the shenanigans maybe it’s all the fun, but there’s a general misconception that bartenders are neither smart nor ambitious. That bartending is a party induced phase whose up must eventually come down. Since starting Meet The People, I’ve met some of the most knowledgeable, curious, intelligent people I’ve ever interviewed, who all just happen to be bartenders. Many of them are qualified engineers, scientists, businessmen and women, I could go on.

Anyone that can serve and have a conversation with drunk, annoying people is not only smarter, but more noble than you or I. Why? Because drinking does many things for everyone: it makes us funnier, it makes people across the room better looking, gives us personality etc, but it certainly does not make us tolerable. Evan Stroeve from Shady Pines recently told me, “Bartending isn’t about cocktail or beer/spirit knowledge; it’s about knowing people. What makes them tick, what satisfies them.”

So, are you smarter than your bartender? Well, I don’t know you, but I’m going to hazard a guess and say “Nope, probs not”. To prove it, Charlie Lehmann refers me three bartenders: Charlie Ainsbury, Nikita Ward and Evan Stroeve to talk what’s in their big bartender brains, how it all got there and what makes up a smart drink. 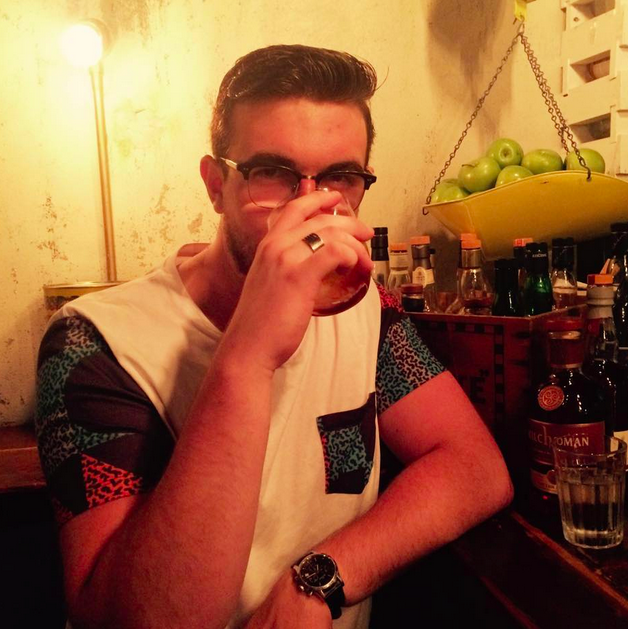 Evan works the bar at Shady Pines five nights a week. And don’t be fooled, he’s smart even without glasses.

DEGREE: Currently studying a Bachelor of Arts (Media & Communications) at University of Sydney, majoring in government & international relations and philosophy.

The single unifying thread for all these people is that when they walk into your bar, they have the potential to either leave feeling better and happier, or annoyed, underwhelmed or worse off in some manner. My philosophy is to do everything in my power to guide guests through the former, positive experience, not the latter. It might be idealistic to argue that a bartender can always make you happier or ‘make your night’. Fuck yeah I’ll pour you a shot of Van Winkle 20. And fuck yeah I’ll fill it with Coke. Then I’ll absolutely make you 15 mojitos. Then I’ll try and make you laugh. Or smile. Or engage.

WISDOM: I suppose, coming in with a positive attitude provides the materials for us, the bartenders, to make your night that much better. More in the common sense stream of thought; treat us as your equals, be patient and don’t be a dick. I think the best ‘house rule’ I’ve ever seen is at Earls; “don’t be creepy”.

SMART DRINKS: Drink whatever you enjoy drinking. Be prepared to experiment and try different things. Maybe, being smart is being open minded. Or maybe Whisky is the smartest drink in the universe. Yeah it probably is. George Washington used to distill his own rye and he did pretty well for himself, first president and what not.

Charlie co-owns This Must Be The Place with past MTP playboy Luke Ashton. He was the 2014 Australian World Class winner and if you catch him in thought he has a delightful resting bitch face on a day to day turn around.

WISDOM: Learn some jokes and know how (and when) to tell them. Ask lot’s of questions – never ask the same question again. Fuck perfection, strive for excellence.

SMART DRINK: Stand at the bar, let the lady sit. Offer her a sip of your drink and swap if she likes yours better. I don’t know about smart drinks but I might know a thing about smart drinking

Nikita currently works as a Brand Ambassador for William Grant and Sons, while getting ready to open new bar Jangling Jack’s. She also does the odd bartending shift at Ramblin’ Rascals Tavern and Kubrick’s Bar.

I decided to leave teaching after a couple of years when I came to the realisation that I didn’t particularly like kids (seriously kids are shit and they are real mean!). Managing 30 kids at 8 in the morning with a hangover was hell on earth and you weren’t allowed to drink during the day. So, I woke up one day, quit my job, booked a one way ticket to Sydney and decided to go back to bartending full time.

PHILOSOPHY: ‘If you don’t like it change it’. It’s a pretty simple thing to apply to most things in life. I guess it’s about owning your choices and where your life is going.

I get bored pretty quickly so it’s important to keep things interesting and continually challenging yourself in all aspects of life and work.

WISDOM: ‘Don’t be a fool, wrap your tool’…. that seems like a pretty good piece of info!

SMART DRINK: A smart drink is when we are 5 deep at the bar and everyone is ordering cocktails and you order a beer and a shot. I love you smart customer person! Everyone should order beer and shots!

If you spend some time with bartenders, you’ll understand they don’t subscribe to social standards, because better things to do obviously. This leaves them with an eternal thirst for learning and an uncapped potential to achieve. Really, at the end of the day, it’s just science. Still don’t get it? Don’t worry, I was never good at science either.

Your bartender is smarter than you.

Thanks to Charlie Lehmann for the bare chest and feature image.