These days anyone can open up a hipster cafe. Just throw in some antique chic rustic decor, hanging plants, put a cute guy in a denim apron with a topknot behind the machine and sell some cronuts.

However, if you really want to gain my coffee loyalty besides a good cup – get to know my name, give a real shit about how my day is, care at least slightly when it’s not a good one and have a bit of banter. I’m not asking for too much am I? In return I’ll promise to not be on my phone at the till, make a stupidly complicated coffee order and pretend I’m running late just to skip the line. 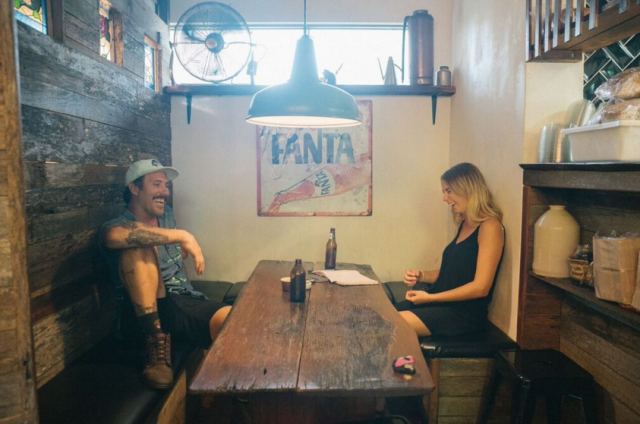 But these days it’s true – having an ‘all the rage’ cafe is a bit like a Freakshake. It has its time in the limelight (Broadsheet, Time Out, everyone’s instagram) then another place on the street opens up and takes its title. Sure you might remember a great coffee, but you’re going to remember the barista who made your morning even more. One person that knows this for sure is Justin ‘Iddles’ Iddles – a guy as chilled as a stubby on ice if he hadn’t drank it already and part owner of ‘Boots Darlin’ in Darlinghurst.

I found it quite ironic to walk into this western themed joint yet be greeted by a bloke in a Hawaiian shirt and old-school cap with his leg hiked up the seat and a VB on the table. But I sure as hell wasn’t going to turn down the free beer either, even though I thought he was supposed to be making me a coffee.

For someone who was initially going to be a physio, I found it pretty impressive that Justin is willing to get up at 4am everyday to ride an hour on his pushbike to run a cafe. Apparently it’s way more satisfying to make a pit stop at the pub halfway home instead of being stuck on shitty public transport. He’s also once chased a guy who was high as a kite and stole a croissant – before letting him have it, to only then see him out later one night in a suit and realise he was a real estate agent who actually had money. However, Justin isn’t the type to make you feel shameless or beat the crap out of you. Instead he made up with this guy who then became a regular at his cafe hailed by all as ‘the croissant thief’. 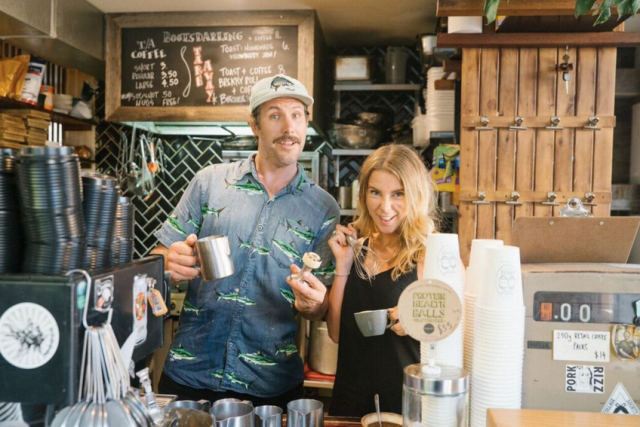 The most atrocious review cannot offend Justin, even if it’s one about deceiving mirrors and not enough room to swing a cat let alone a mouse. To him it’s another excuse to crack a joke and to be honest, he doesn’t give a shit about the size of his cafe – just as long as there’s good banter and a place to chill out.

It’s all about the people

He hates the word ‘hipster’ but he’ll admit that he probably opened up one of the first cafe’s of it’s kind in his early 20’s for corporate people who led a double life.

“For me, I could never understand seeing my corporate friends knowing what we were like on weekends, then knowing they were still that same person going to work during the week. There was never that kind of environment for them to go and hang out in – everything was just this sterile, money making, no atmosphere kind of place.

“This place became an outlet for those people to get out of their building and come and have a coffee for half an hour, have a chat and chill out. It was 100% about the atmosphere and the people more than it was about anything else.” 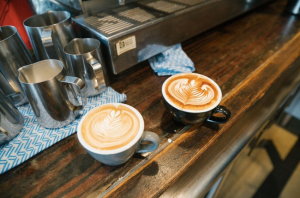 When I asked Justin what makes people come back to his joint – fine artisan coffee wasn’t his first answer. He actually believes the majority of people can’t tell the difference between beans and roasters – it’s all in their head. But then again, with a guy like him distracting you with his top notch banter and goofy dance moves – you probably wouldn’t give a shit what beans are used for your coffee either. This is coming from the bloke that would re-brand his cups and allow coffee snobs to assume that he roasted his own beans, but hey it’s not a crime. Just how Ron Burgundy would put it – ‘it’s an optical illusion’, and it just so happens Justin has a scary resemblance to Will Ferrell too.

No one likes arrogance

Justin puts his successful customer retention rate down to simply being friendly and nice. He says even if at first people think you’re faking it or too sterile to care, you need to appreciate them spending their money. Hence why he is hell-bent on cracking even the most ice-cold person and with only 10-15 seconds to do so, he nails it so effortlessly like a stand-up comedian.

“I would rather go to an average cafe and get really good service and have an experience then I would go to a really good cafe and get an arrogant barista and waitstaff. I would just walk out. Sorry for ordering what I did and drinking the coffee that I wanted”.

Justin will admit he has turned up to work hungover more times than he hasn’t. But to the people that know him, something would definitely be wrong if there wasn’t a beer under the coffee counter. He’s the guy that just wants to have a good time, make people’s day and doesn’t say no to anything. Being a barista is part of the lifestyle and sorry Merrick Watts with your condescending attitude towards cafe people – but it is a real job and for someone who has done if for fifteen years – Justin will happily say with pride it’s been 100% his life making coffee. That of course along with being a fruit ninja, playing Eggward Scissorless hands in the kitchen or pouring Milky McLovin coffees on the floor just because he can.

Hard work, a clear head and being a good boss

What makes this guy so loved is his ‘why change who you are’ or ‘why stop having fun’ attitude. Whilst he used to consider a barista job as just some pocket money, over the years he’s realised it’s much more than that, especially since starting a family and business at the same time. He says if you’ve got the balls and passion to do it and open your own cafe – it can actually provide for your family and the life you want. He’ll admit that he hates being in the kitchen or doing dishes, but if that’s where he is needed he’ll do it. That’s the other thing I like about this guy – he won’t lie if he hates something, yet he’ll also do what it takes to make it work and always finds a way to make it fun. 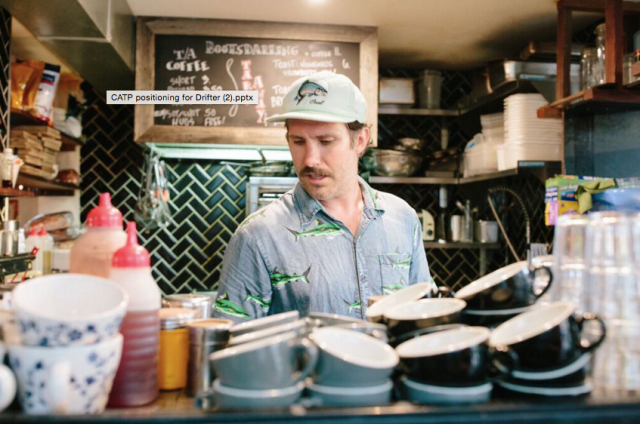 “The first six months of having a baby and having a business – all of that stuff has been a big learning curve and I’m not really changed in any other way it’s just been having some responsibilities and having some commitments and really – it’s probably gone hand in hand with having a business – that’s what it needs. A lot of hard work, clear head and a good boss and I think that I am. At the end of the day for me as a business owner and a barista, I wouldn’t be doing it if I couldn’t have a fun time doing it”.

Justin’s admits five years ago you could probably open up a decent cafe and succeed but these days it takes more than just buying an old space and doing it up into something cool. He doesn’t care about making money, but more so the kick in the guts of it not working out. But apparently a good place to start is a bossy Pandora playlist.

“I think good coffee, good music and a friendly atmosphere are really the three things that you need. If you can keep all of those things consistent then you will do alright.”

Maybe the other secret to Justin’s run of cafe success is his infamous dress-up days. What started as dress-up fridays in suits to poke jokes at corporate folks has continued along to cowboys and indians, halloween, St Patricks Day and Mardi Gras. Any excuse for Justin to show off his body – whether it be a midriff top, short shorts or fishnets.

You never know what to expect with this guy – but I definitely recommend you head to Boots Darlin’ to find out. Just don’t use it an excuse to get high and steal a croissant.