Bartenders… they slam chat with hundreds if not thousands of people per week, so you’d think they’d have some fairly good game when it comes to making people feel at ease and get into the swing of things. These 10 Sydney Bartenders have exactly that and are guaranteed to get a good night going.

When customers describe you as having a ‘nice friendly face’ it’s a pretty solid bet that people are going to warm to you easily. And, you won’t come across a more gregarious fellow than Quynh Nguyen who you can find running a tight shift behind the bar at Fred’s or Charlie Parker’s in Paddington.

Quynh’s been bartending for over nine years, so he’s got his people skills down pat. Unexpectedly, Quynh was actually in civil construction making footpaths and football fields for councils and made his way into bartending after a friend needed a bar back/glassy for an event.

While he’s all smiles on the outside, Quynh can handle the toughest of gigs, once being present as a bunch of bikers jumped a guy at the bar he was manning at Goldfish in Kings Cross.

If you can’t have a good time with Cherish from Ramblin’ Rascal Tavern in the CBD then we don’t want to know you!

There’s not many bartenders that pack more social punch than Cherish Wilkie and if you’re up for a whole lot more than just sipping and staring into your phone, she’s your gal. From pouring beers, to a strip club bar, to Frankies and now two years in at Ramblin’, Cherish oozes so much charisma you could pack it up and sell it.

If you ask us, once you step in for the night you won’t want to leave and if you’re lucky enough you’ll be present for Cherish’s trademark dance, that according to co-owner Cosmo, “is soo good bartenders from other inferior bars copy her”.

At the end of the day Cherish is playful, kind and not afraid to tell you when you’re being a wanker. But, most importantly she’s much loved by the boys at Ramblin’, so if you fuck with her you’re gonna get the whole gang at your doorstep pronto. 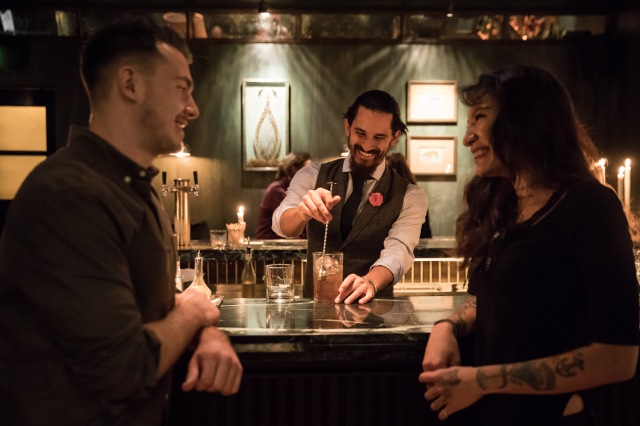 Can we get a round of applause for the guy that served a war veteran and made up a cocktail for him in his very own prosthetic leg complete with over the top tropical garnish!

Englishman Oliver is loved far and wide by customers at Queens Hotel, us included! He started out in a small bar in his home town.

“The owner didn’t really have a clue what he was doing as it was his first bar and he would try all manner of things to bring in the customers. When a certain song played we would all have to dress up and dance around. It never went down well and was super cringey. I’m surprised I wasn’t put off bartending for life!”

Oliver is a bartender who genuinely cares about making people happy and has a real interest in creating an unforgettable atmosphere. Self described as the ‘Englishman that finally made it to the sunny country,’ he’s obsessed with tropical living so expect a bit of sunshine and smiles when you pop in for a visit. 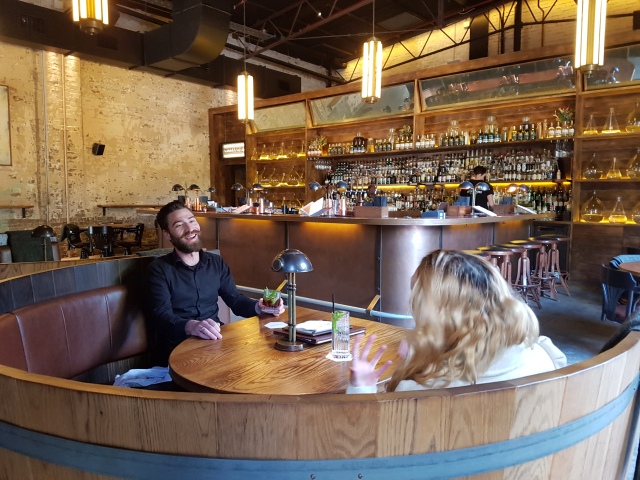 If you ask someone to describe Ben Marshall’s trademark they all say “always being on point with platinum chat” and that’s a saying will be taking on board for the future.

His Facebook work info reads “Making People Happy at Archie Rose Distilling Co” and we don’t doubt it as Ben delivers charisma and personality with style. He’s a friendly and likeable bartender who uses a combination of self-deprecating humour and involving customers with the staff to put you at ease.

“Being a bartender means I get to host a party every night and walk the centre of my very own stage. Within that space, I enjoy more than anything the ability to help make someone’s night or provide the best cocktail they have ever had. This is what makes me happy in my work.”

Head down to Archie Rose in Rosebery to witness Ben in action and potentially have him take you on a tour of the Distillery.

Hard to not have a sunny disposition when you’ve got the whole of Sydney Harbour as  an office backdrop. Laura Persiani is the bar manager at Henry Deane, which perches atop the iconic Hotel Palisade in Millers Point. She’s our second Italian to make the list and we’re not disappointed about it.

Growing up Laura seemed destined for the bar. When she had fevers as a child in Italy her father used to give her shots of Sambuca because he didn’t believe in medicine. She was 14 when she chose to attend a hospitality focused school then went on to work in London for two years at some of the best bars before coming to Australia.

“I became a bartender because I wanted to be part of people’s celebrations and memories, the love of music was also part of it.”

Laura’s loved for her composed ability, when you’re kicking back at Henry Deane everything just seems to sail smoothly because she runs her bar tight and right. And when we ask her what makes a charismatic bartender? “For me, it’s confidence in one’s individuality and knowing what your guest wants before they even know.”

Self described as an ‘above average humble prince’ Alen’s charisma is literally leaking from his pores and he’s not shy about it either.

The current GM at Shady Pines Saloon in Surry Hills, you might remember Alen from our recent piece on why you should go drinking with a bartender. Alen’s philosophy is that if you swear more, people relax more, so expect a few F Bombs to come your way while sitting across from him at the bar.

Having worked in some of Sydney’s best bars including Tio’s and Baxter’s Inn, at the end of the day Alen says being charismatic is just about entertaining people.

“In the end it’s almost like you’re on a stage, you have to be a bit funny, you have to be good at stuff. The whole time you’re just standing there staring at people s if you don’t get involved with them you’re not a real bartender.”

Go pay him a long visit, we’ll probably see you there!

Beard, Tattoos and a leather apron – these are Mario’s 3 key ingredients for making an engaging bartender and you’ll find them all behind the bar at Charlie Parker’s in Paddington.

Up there with the Aperol Spritz, Mario Le Pietra is one of Italy’s greatest exports in our opinion, even just saying his name is fun! And you’ll find yourself hard up to have a better time with the guy that originally wanted to be a chef but to get a day off from cooking school decided to take part in the Bacardi-Martini Grand Prix. Naturally the comp was a disaster but Mario became hooked on tending. He also loves a cheeky gag.

“When I was working at Bassoon Bar in London, there was a 7 metre long piano as part of the bar counter. To celebrate the premiere of the musical Viva Forever, a few people from the show decided to throw a party without booking. Apparently the Spice Girls were on their way to the bar. My first thought was to ask the waitress to unplug all the speakers from the piano, hiding the wires. When Geri Halliwell sat at the piano to perform, well the piano was broken so they had to move in one of the suites and run their party there.” 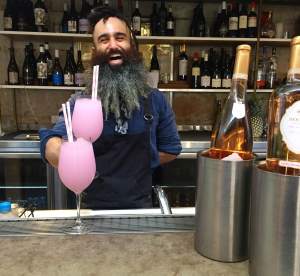 One of a kind is the only way to describe Inia who splits his time between The Butler in Potts Point and The Potting Shed at The Grounds of Alexandria. We recently discovered the New Zealand native at an event and were blown away by his infectious smile and laid back demeanour. It helps that he describes himself as an ‘eternal optimist’.

“I love a good time, love a party! I really get a kick out of making things look and taste great so the bar is just a natural center of gravity for me.”

Inia’s honed his craft and people skills at The Winery, Champagne Room, the Newtown Hotel for years, Candy’s apartment, Pier, Melt and Zetta. He’s not only loved by customers but the industry as a whole and if you you can’t feel relaxed in his company then there’s no hope for you. He also offers great advice and is fully aware he looks like a pirate. 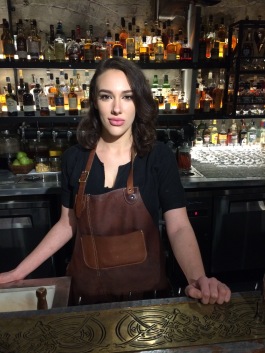 With a healthy dose of sarcasm, Vashti Hardie is your go-to bartender at Speakeasy Group’s most recent viking inspired venue, Mjølner where she’s being throwing chat around since it launched in March this year.

Now with 5 years under her belt, originally Vashti got into bartending to avoid another Christmas in retail, but fell in love with the job. “I’m still awestruck with the amount of hard work it takes as well as the spectacular talent and knowledge that so many bartenders have.”

Her craziest moment behind the bar? “Day of the Bar Awards a few years ago when I was working the bar and 300 parched bartenders rushed in. I was making daiquiris at a furious speed in what felt like 100 degree heat. Gradually, I noticed the workload lighten and I turned around to see a bunch of bartenders had jumped in to help me – all of them very naked. I spent the rest of the night running around trying to cover the perishables (not how it sounds).”

Go pay Vashti a visit at Mjølner in Redfern, she’s big on cocktails that involve carving ice or using a blowtorch, so not only will you get some great chat with your drink, but you’ll get a decent show to top it off. 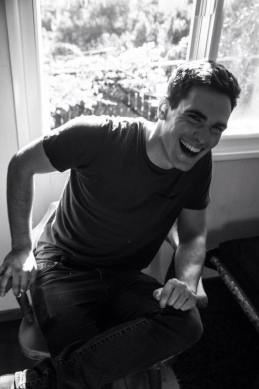 Henry is a real character. He works at the Whisky Room at The Clock in Surry Hills and upon arrival will legitimately welcome everyone with a “mighty lord”.

Henry got into bartending in 2010 after he was sick and tired of stacking shelves in Safeway/Woollies and got a job through his brother’s mate. He’s been working for hospitality group, Solotel for the last three years.

Being the performer is something Henry thrives on so you can expect a real show in his company. That said, as Henry proclaims his, “outgoing behaviour can sometimes go a little far, so I try to toe the line.”

Pay him a visit for guaranteed laughs and good times.

Know someone you think should be on the list or someone we should interview? Get in touch at brittany@meetthepeople.co or  Subscribe to the conversation.