A setting where you ignore the urge to grab your phone out and instead, enjoy the food and the company you’re in. Somewhere where you can do regular masterclasses, tastings, culinary excursions and cocktail shakings. A place where you’re encouraged to have the full sensory experience, rather than being kicked out for the 8pm slot.

This is the concept of Contact Bar and Kitchen in Woolloomooloo, carefully curated and put together by General Manager Markus Stauder and Head Chef, Jonathan Robson.

After meeting through a housemate Markus and Jonathan instantly built a rapport. They had both tried their hand at other careers in their younger days, before realising hospitality is where their heart and grit is at.

Along with their impeccable CV, these gents know exactly what they’re talking about. First, there’s Jonathan, the smooth-talking English stud who has stepped foot in one of the finest cooking schools and catering businesses in England. Then there’s Markus, the dapper Italian who has done his qualifications and training in every hospitality department you can think of, including the third-best camping resort in Europe. Together, they’re pretty much unstoppable.

At first I wondered how two such independent, charismatic, strong males could open a restaurant together without a face-off along the way. But as I soon found out, it’s passion that triumphs every time and the mutual acceptance that ‘two brains are better than one’. 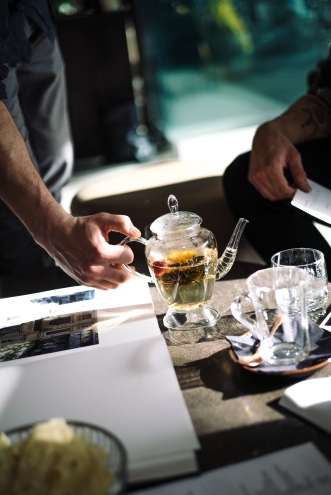 According to Jonathan, it’s all about having respect for each other. “He appreciates my own person, especially as a chef being micromanaged is very disillusioned. You can’t put your passion into something if you’re being told off, you can’t create your sense of food with those parameters and being able to express myself on the plate with his support has been amazing. Having that support is so essential for someone to grow. That’s exactly how it should be.”

“Compromise, there’s nothing worse than someone who does what they want and doesn’t consider anything around them. We’ve both had that before in the industry, and we’re not going to let that happen again. Together we bounce off each other, talk it out and share different ideas. Even if something’s not right, we’ll try it discuss it then become better for it and learn and grow,” says Markus.

NOT JUST HERE TO MAKE A QUICK BUCK

It’s their combined twenty-plus years experience that has these young chaps ahead of the rest. Jonathan, whose passion for food was injected by his mother who is a chef, and Markus who started washing dishes in his uncle’s restaurant as young as ten years old. Both of them developed a thick skin over the years from people who told them the industry is shit, there are too many hours and it’s completely unsociable. Their unwavering determination now has them stamping their own legacy. 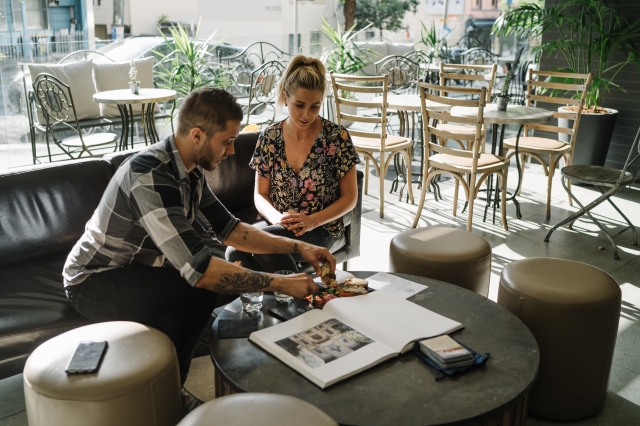 Jonathan indicates it’s so much more than just cooking. “There are life skills, it’s the same with the floor, you have connections with people every five minutes. It’s about having social etiquette and being able to make genuine connections with people in a small frame of time. We want to be unique and create something that hasn’t been done, unfortunately the city is saturated with cafe’s, restaurants, burger joints and pizza places, all pretty much doing the exactly the same thing, nothing special, no love just ‘how can we make a quick buck’. It’s sad, it’s definitely not the reason I’m in hospitality and neither is Marcus.”

LOVE AND LEARN WHAT YOU EAT

For this reason the Contact Menu is far from mundane – using every single part of the meat and produce through all creative means possible. There’s ‘no wastage’ as Jono puts it.

And he’s right. The moment that chicken, wild mushroom and prosciutto terrine hit my palate, I sensed every damn mouth-watering part of it as he explained the cooking process.

“I’ve got a lot of conviction as to what we’ve got. People love to hear about how it’s made, and if you can really push the interesting parts of it then people love that. The whole point of this place is so people can come here and learn as well, because if you’re not growing your knowledge and passion then what’s the point.”

This is why the boys attribute ‘education’ to their already opening success. Whether it be the unique menu, truffle hunting excursions or champagne masterclasses.

“We want to invite people that are experts in their field that can teach us and our customers something, so they can enjoy their product. We want to build on that and people to come here with a certain interest because you are what you eat. We want to create a carpool of like-minded people where we can take the concept even further,” says Markus.

Their other success factors? Getting people to have real conversations and banter like the old days, which they’ve considered in their design details too.

“All our tables are round so there’s no politics. Everyone is welcomed. You come here to switch off. The inspiration came from the fact that the food industry keeps growing and growing and unfortunately with the growth, quality suffers. So we wanted to create a space like it was in the good old days – a place to socialise, go out meet people have a chat, relax, switch off and get served high quality food and drinks not mass production just to make money,” says Markus.

Jonathan explains their vision is to have people come in, get off their phone, stop taking pictures and actually have a proper meal and experience together, not something that you can put on your social media. “People have understood that and the feedback we’ve been getting has been so positive.”

YOUR ATTITUDE SETS THE TREND

When I asked the guys what the biggest challenge has been yet, they both responded with ‘creating a strong team’.

“The customer’s sense when the team is a team, and not just a bunch of people that work together. The more you move on and have the same negative experience as an employee, it just sets a trend for people to become negative and disenchanted with what they’re doing. What we really want to do here is get rid of that mindset and have our team excited about the future and what we’re doing, it’s essential,” says Jonathan.

When someone throws the towel in and everyone in the shit, it means the team factor wasn’t there. It’s hard to find people with the same level of passion and knowledge they want to share and need to grow too. People that all want to move in the same direction. We’re still adjusting, but for now we’re at a good level,” Markus concludes.

To actually put some social back in your next social gathering, be sure to dial the boys at Contact.

Know someone else with a great story we should interview? Get in touch at brittany@meetthepeople.co or  Subscribe to the conversation.